Hey! I've been promising you an all-funnies post for a couple weeks now and here it is.

Well, one personal note... my grandson was over last night and we watched the season premiere of American Horror Story on TV. We were a couple minutes late and the dog started without us. He shouldn't watch those things alone. 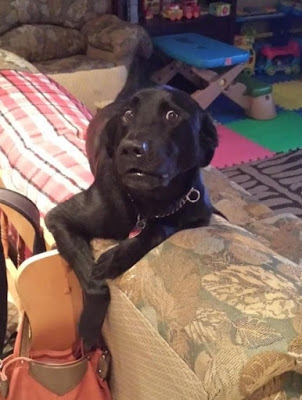 You may remember I claim the right to tell little old lady jokes because I am one. I like this one:

We went to breakfast at a restaurant where the seniors' special was two eggs, bacon, hash browns and toast for $2.99. "Sounds good," my wife said. "but I don't want the eggs."

"Then I'll have to charge you $3.49 because you're ordering a la carte," the waitress warned her.

"You mean I'd have to pay for not taking the eggs?" my wife asked incredulously.

"I'm afraid so," said the waitress.

"I'll take the special then," my wife said.

"How do you want your eggs?" the waitress asked.

"Raw and in the shell," my wife replied. She took the two eggs home and baked a cake."


You know, I shouldn't let that dog watch so much TV, but it does keep him out of trouble. I hate to keep posting these... 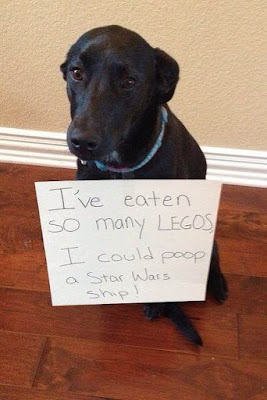 And I mean the big cruisers, not just the little X wings.

How about a little something to exercise your brain and not just your funny bone. Try this...
A farmer died leaving his 17 horses to his three sons.  When his sons opened up the Will it read:

As it's impossible to divide 17 into half or 17 by 3 or 17 by 9, the three sons decided to go to a farmer friend who they considered quite smart, to see if he could work it out for them. The farmer friend read the Will patiently, after giving due thought, he brought one of his own horses over and added it to the 17. That increased the total to 18 horses.

Now, he divided the horses according to their father's will.

Now add up how many horses they have:

Now this leaves one horse over, so the farmer friend takes his horse back to his farm.
Problem solved!

Let's switch from math to English. 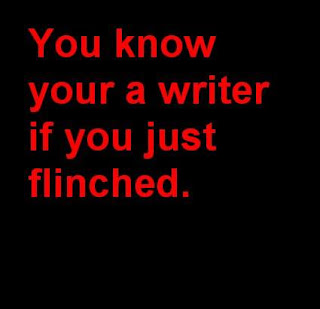 Yeah, I know you did.

Well, she tried to tell him... 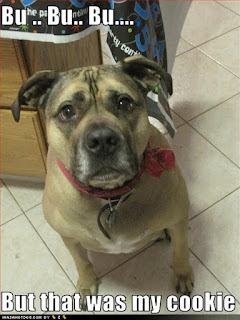 Don't you want to run and get him another one?

That's it. Did you find a chuckle in here somewhere? A giggle? A good old LOL?

I hope so. Did you have a favorite?

Have a great weekend and I'll see you next week. 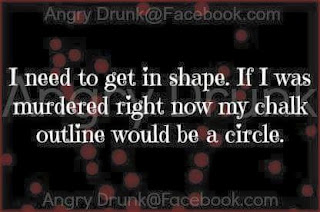 What I want to know is where is that restaurant with the $2.99 breakfast? What a bargain! I couldn't eat that cheap at home. How much is the coffee? That could make or break the deal.

Arlee Bird
Tossing It Out

Hi Liesel - love that first photo .. while those stories - crazy - would love to have the eggs though .. cheers Hilary

So many great funnies! I especially love the egg one. So clever!

You definitely had me laughing with these. The math problem is something else. Now I've got to go work on my chalk outline. :) Have a wonderful weekend.

I love those dog shaming pics. They crack me up :)

I love the expression on your dog's face.

It's terrible when restaurants do that! They'd rather have you waste the food! Love the pics of your dog and all the rest of your funnies! Especially the one about the chalk circle! :)

Okay, to be honest here, I took a little literary license with the dog pictures. That's not my Sophie, just pictures I thought were funny. Sophie doesn't like TV. She's more into napping.

Lee - They probably make up for it by jacking up the price on the coffee.

Alex - Are you kidding? Some of those classic Disney's were terrifying.

Hilary - LOL. You saw what auto correct did to your name last time. I was on my phone and didn't realize it until much later.

Mason - Yeah, my chalk outline needs a bit of work, too.

Diane - Hey, she was right.

Kathryn - Thanks. I'm glad you enjoyed them.

Well... If all those fractions added to 100%, then I'd wonder, too, but since they only add up to about 94%... :) By the way, how was American Horror Story? I've got the first 4 on DVD and have only watched the first 3, but this year's seems to deal with spiders (at least that's what they show on the commercials) and I'm not such a fan of those. **shivers**

My eyes glazed over the maths. Never chuckled over numbers once :) Particularly enjoyed the 'Flinching writer', and before I forget, your earlier post on helping out at the floods. It's been said to you many times before, I'm sure, but you do good things.

You really made me smile today. And I needed that. Smart old farmer.

I liked the egg story. Too funny!

I love the first picture. He truly looks scared.

Yay for the funnies! Absolutely love the top picture. That looks like me watching AHS when I got home from work. I decided quickly that late at night when I was alone was not a good time to watch. I'll go back to the episode tomorrow during the day LOL.

Have a great weekend!

I tried to order a breakfast without toast when we were on holiday and was told the exact same thing!!! So ridiculous!

The math solution was pretty cool, and that scared dog just cracked me up.

Poor Iko has that face when the fireworks start going.

hmm, my chalk outline would be a circle too, lol. I enjoyed the laughs LD :)

Stacy - Okay...another "to be honest". I don't watch horror stories. Of any kind. They freak me out. I sat in the room with my grandson while he watched it and spent most of the time reading a book and trying not to look at the TV while listening to his running commentary. But I'm pretty sure the spider images were just part of the promo. They didn't seem to be part of this episode.

Susan - G/K - Glad I was able to give you that smile. I'll work on a full-fledged LOL next time.

Chrys - That's how I look watching that stuff.

Julie - I want daylight and at least one other person in the room.

Jemi - Crazy. So you let them bring you toast and feed it to the birds.

Morgan - You're most welcome.

Maria - I never see Sophie's face when she's scared. It's buried in my lap.

Dolorah - I'm glad. Good to have you stop by.

Okay, I admit it. I did flinch.

That horse thing blew my mind. It's like ... magic! Thanks for all the funnies. I laughed hardest at your "could poop a Star Wars ship" one and the Aw definitely made me Aw. Have a great week! :)

Bwahahahah! It's in the pool. Oh my.

You can do American Horror Story? We just went to a haunted house at Universal Studios based on it, and I pretty much have no interest after that. I'll stick to my superhero TV shows.

You're/your. Yeah, that one drives me nuts.

Thanks for the funnies. I needed them this week. :)

Robyn - Thanks. Yes, Drake has some big footsteps to follow. Generations of them.

Liz - Cuteness overload, I know. Thank goodness I didn't run into that little face in a shelter. Sophie would not handle it well if I came home with a puppy. (Sophie loves people, other dogs not so much.)