Release day for Busted! and Your Quiz Answers

I know you're waiting for the answers to last week's quiz but before we get to that I have to mention that yesterday was RELEASE DAY. 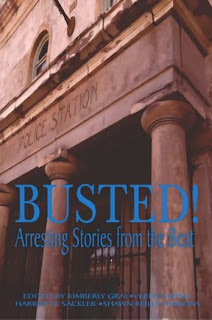 Busted! Arresting Stories from the Beat is now available in print or ebook.
This anthology of crime fiction contains 31 great stories, including my "Annie Get Your Goat".

“McCullough!” Duke’s voice exploded in the quiet of the hospital. “That bastard stole my goat.”

Now he rounded on me.

“You. You’re one of Sheriff Block’s, right? Why are you just standing around here? That son of a bitch Chet McCullough stole my Gertrude.”

I pulled myself up to my full five foot two and tried to look official, if not formidable. “Deputy Anna Lopez, Mr. Stamper. I was questioning Mr. Tate when you arrived. Trying to find out what happened.”

“I just told you what happened. Chet McCullough attacked Sean so he could steal Gertrude. Oh God…unless he killed her. I wouldn’t put it past the son of a bitch.” He did a quick pivot toward the door then turned back to me. “I’m going home to search for Gertrude. You tell Sheriff Block I want him at my place. Himself. Not some little…deputy.”

I was lucky that Duke stormed out of the room before I could answer. My quick tongue has gotten me into trouble before.


Okay, now what you've all been waiting for...quiz answers!

No one got them all but most of you got a few. You were great on punctuation marks and things worn on the feet that begin with S.

Here are the answers I received with the quiz.


1. The one sport in which neither the spectators nor the participants know the score or the leader until the contest ends: Boxing.

2. North American landmark constantly moving backward: Niagara Falls ... The rim is worn down about two and a half feet each year because of the millions of gallons of water that rush over it every minute.

3. Only two vegetables that can live to produce on their own for several growing seasons: Asparagus and rhubarb.

4. The fruit with its seeds on the outside: Strawberry.

5. How did the pear get inside the brandy bottle? It grew inside the bottle. The bottles are placed over pear buds when they are small, and are wired in place on the tree. The bottle is left in place for the entire growing season. When the pears are ripe, they are snipped off at the stems.

8. The only vegetable or fruit never sold frozen, canned, processed, cooked, or in any other form but fresh: Lettuce.

I did a major head slap over number 8. How about you?
Did any surprise you?

Okay, you can rest your brains.
Here's today's funny.

A married couple was working opposite shifts - her days, him nights - so their only time together was on the weekend. But living in a small apartment with a curious eight year old didn't leave them with a lot of opportunity for...um, private time. The only way they could manage a Sunday afternoon "quickie" was to send the boy out on the balcony with a Popsicle and tell him to report on all the neighborhood activities.

He began his running commentary as his parents put their plan into action. "There's a car being towed from the parking lot," he shouted.
"And an ambulance just drove by!"
"Looks like the Andersons have company."
"Matt's riding a new bike!"
"Looks like the Sanders are moving."
"Jason's riding his skate board in the street again."
And then, "The Coopers are having sex!!"

Startled, Mom and Dad shot up in bed.  Dad cautiously called out, "How do you know they're having sex?"

"Jimmy Cooper is standing on his balcony with a Popsicle."

I had a problem with this week's "aw".
I couldn't decide between these two.
Will you help me out?

This one got me because of how these friends were making it work,
even if they were close to the same size. 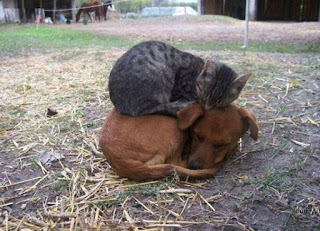 You have to appreciate that kind of devotion.

This one was all about expressions.
Look at those eyes. 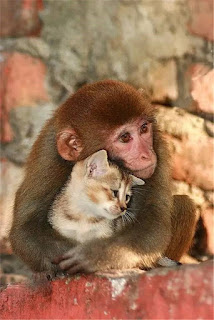 So, what do you think...
was there an "aw" in there somewhere?
Which one worked for you?

I've had some personal "aw"s going on the last week. My two oldest grandchildren are graduating from high school next month, so we're going through a lot of "last time"s.  My grandson's senior prom was Friday and I attended my granddaughter's final orchestra concert last night. The next month is going to hold a lot of those. When I went through the empty nest thing with my own kids, I had no idea it's even harder with the grandkids.


But I think it will be a little easier if I share a few pictures as we go.


My granddaughter, the cellist. 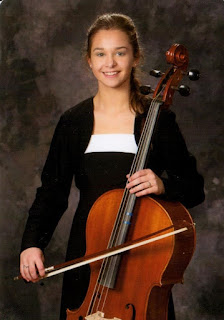 She's really quite good.
I'll miss listening to her play. 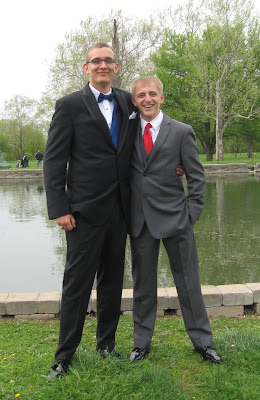 The tall one is mine and, no, that's not his date.
These two have been best friends since they were little.
When they graduate, their lives will be taking very different paths.

And just so I don't disappoint the romantics out there. 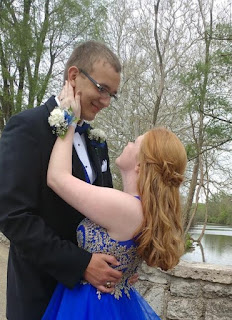 My grandson and his date.
Hmm. That's almost worth an "aw".

Okay. I do feel a little better. Thanks for letting me share.

How about you?  Are you over the hump?  I didn't have a lot of funnies for you this week. Double-dose next time. I promise.

We never really grow up, we only learn how to act in public.

Last week's post ran a bit long so I'm going to keep it short and sweet this week. And I have something different for you, a hump day quiz.

These are not trick questions. And you can probably find the answers by Googling...but where's the fun in it. Answer as many as you can in your comments and let's see who can figure out the most. I'll post the answers next Wednesday.


1. Name the one sport in which neither the spectators nor the participants know the score or the leader until the contest ends.

3. Of all vegetables, only two can live to produce on their own for several growing seasons. All other vegetables must be replanted every year. What are the only two perennial vegetables?

4. What fruit has its seeds on the outside?

5. In many liquor stores, you can buy pear brandy, with a real pear inside the bottle. The pear is whole and ripe, and the bottle is genuine; it hasn't been cut in any way. How did the pear get inside the bottle?

6. Only three words in standard English begin with the letters ' dw' and they are all common words. Name two of them.

7. There are 14 punctuation marks in English grammar. Can you name at least half of them?

8. Name the only vegetable or fruit that is never sold frozen, canned, processed, cooked, or in any other form except fresh.

9. Name 6 or more things that you can wear on your feet beginning with the letter 'S.'

Did you get them all?

Here's a quick funny to reward all that hard work.

A six year old opened his birthday gift from his grandmother and was delighted to find a set of water pistols. He called to his siblings and they raced for the kitchen sink.
The boy's mother was not pleased. She turned to her mother and said, "Why would you get him water pistols? Don't you remember how we used to drive you crazy with them when I was little?"
The grandmother smiled. "Oh yes, dear. I remember."

Yeah, I guess that qualifies as a little old lady joke.
You know I love those.

And here's your weekly "aw". 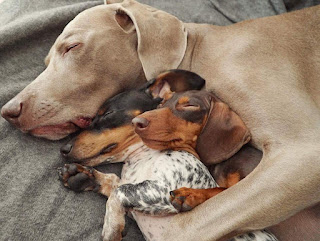 Just a few buddies, enjoying their nap.
(Such faces.)

How'd you do on the quiz? Too hard? Too easy? Enough of a distraction to get you over the mid-week hump? I hope so.

Have a fantastic week/weekend. I'll see you next Wednesday (or whenever you stop by).

Thought for Today:
Experience is something you don't get until just after you need it.