Hump Day and Tuxes and Crooks, Oh My...

Okay, you all know I'm a grandmother...well, actually I go by Nana...and like all good Nanas, I'm faintly obsessive about my four incredibly bright, beautiful, talented (okay, I'll stop) grandkids. Most of the time I keep this blog "obsession free" but my eldest went to his first prom last weekend and I just gotta share some pictures. Humor me, okay? 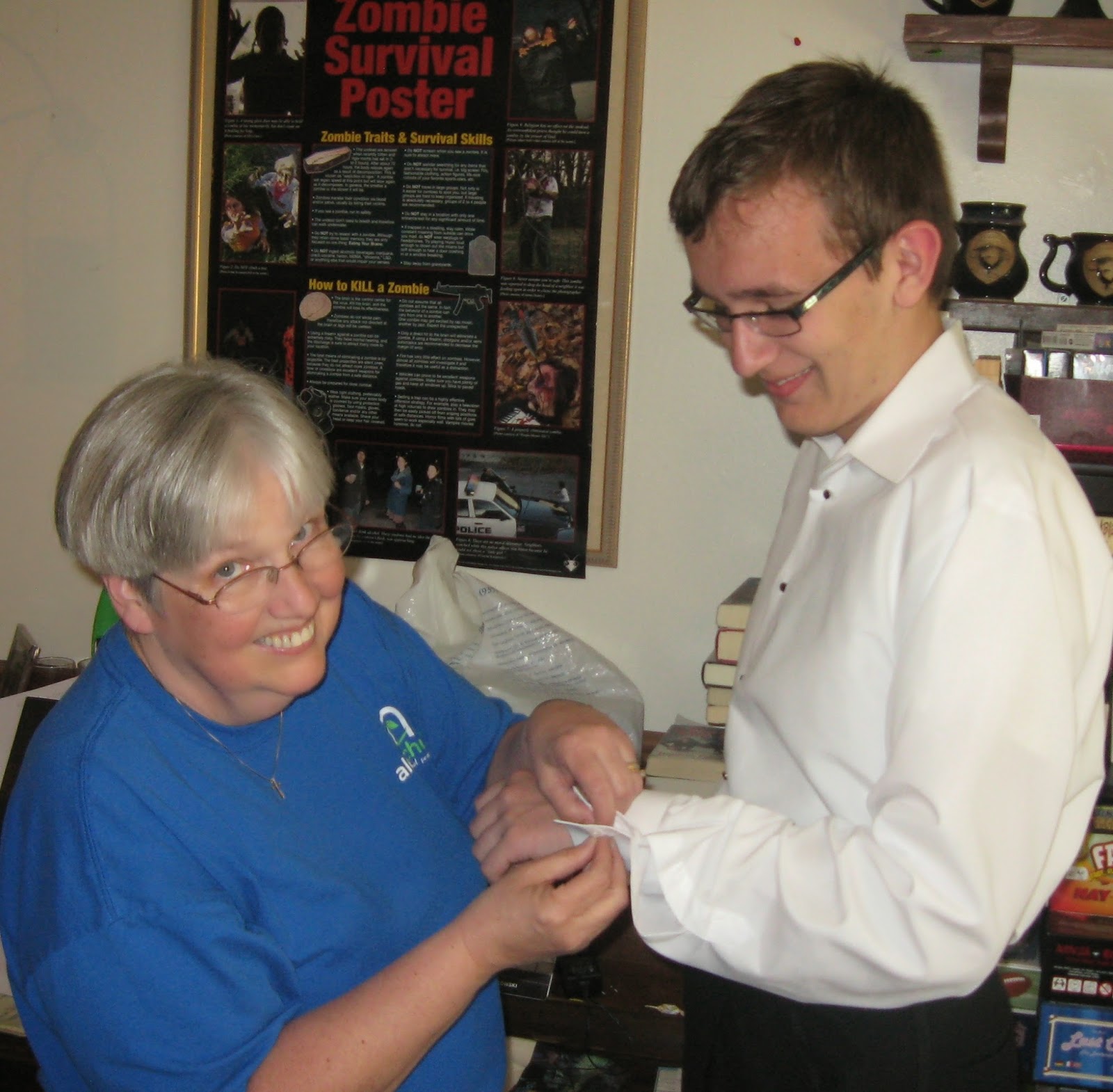 I got to help him get ready, which I loved. He needed some assistance with those cufflinks. 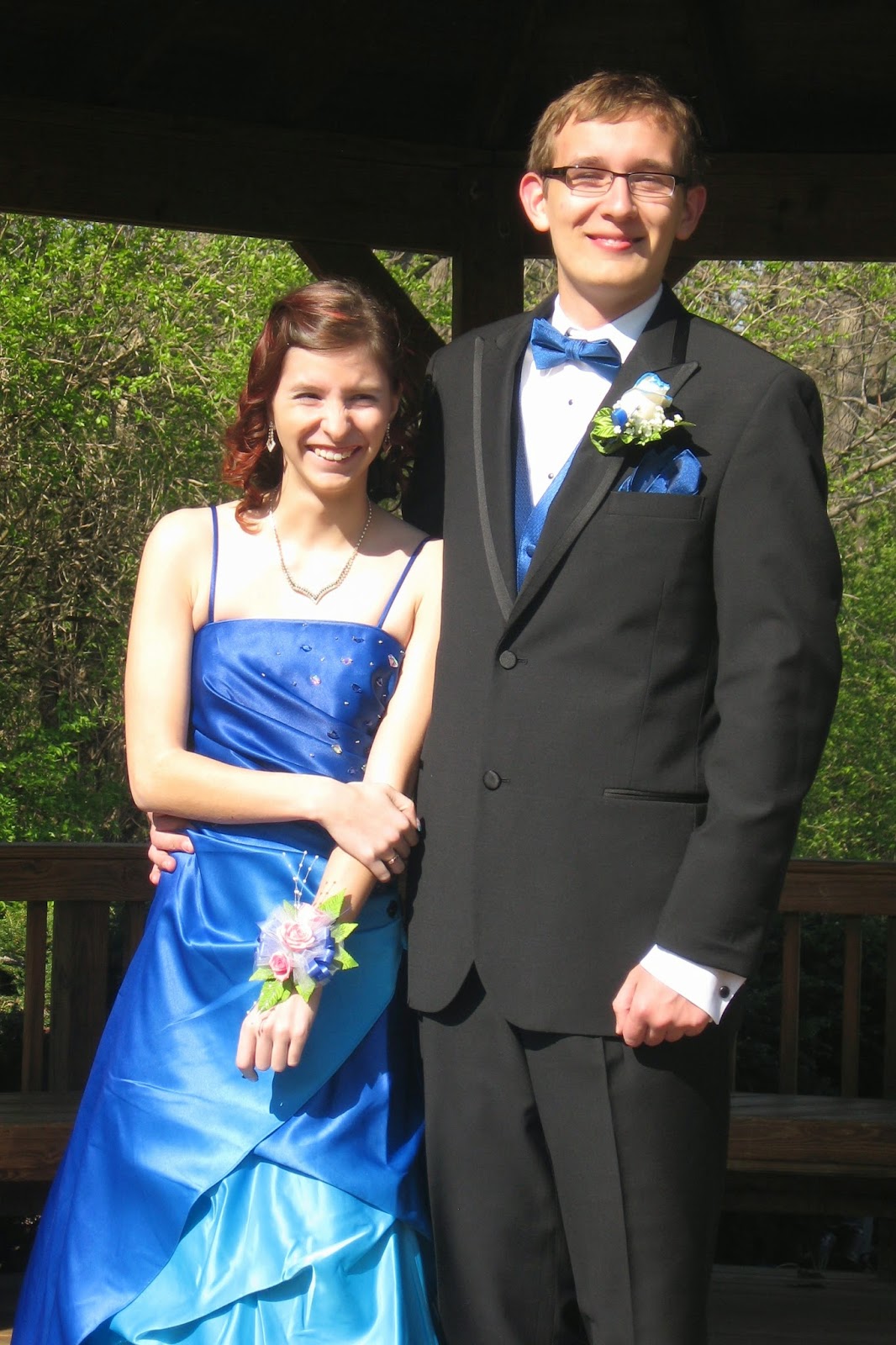 They were a little stiff at the beginning of the photo session... 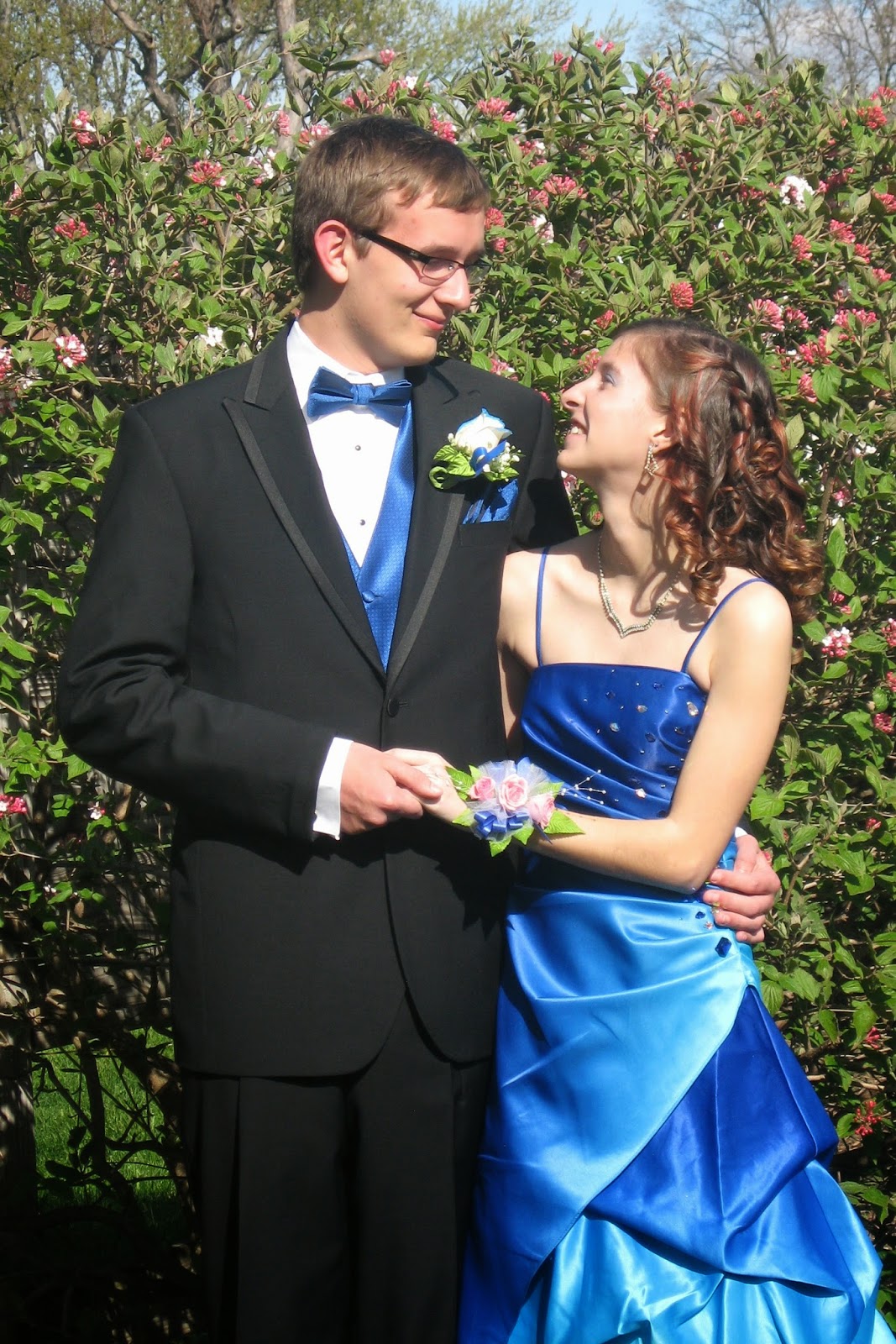 But when they forgot about us and focused on each other, it was lovely. 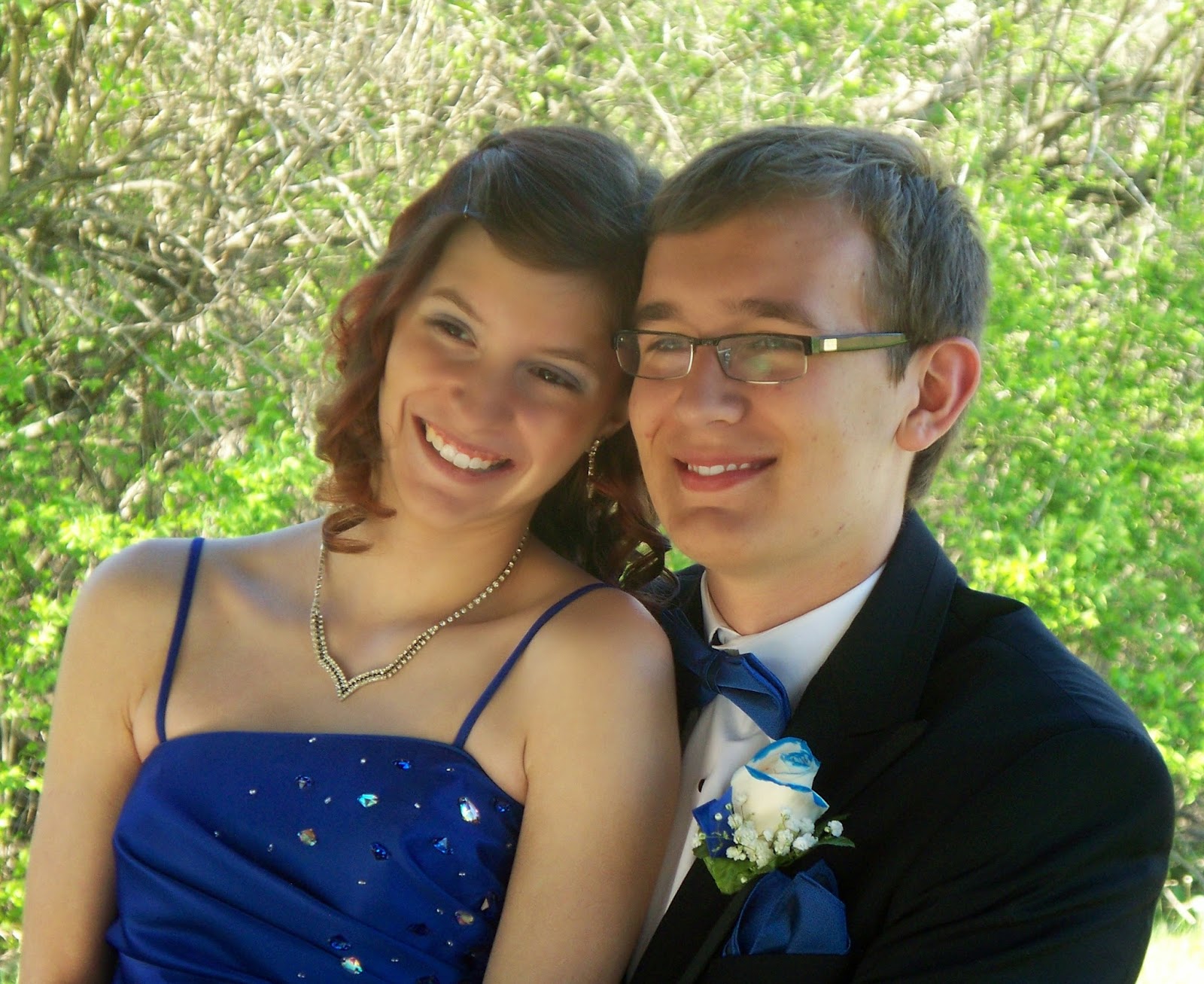 And, of course, I have to include one close up.


See, that wasn't too bad. Only four shots out of a hundred and...um, never mind.

Now on to your hump day funnies.

Do you enjoy stories about dumb would-be criminals?  Let's see if these give you a laugh.

(If someone points a gun at you and gives you money, is a crime committed?)

As a female shopper exited a New York convenience store, a man grabbed her purse and ran. The clerk called 911 immediately, and the woman was able to give them a detailed description of the snatcher. Within minutes, the police apprehended the man. They put him in the car and drove back to the store. The thief was then taken out of the car and told to stand there for a positive ID. To which he replied, "Yes, officer, that's her. That's the lady I stole the purse from."

(I almost feel sorry for him.)

The Ann Arbor News crime column reported that a man walked into a Burger King in Ypsilanti , Michigan at 5 AM, flashed a gun, and demanded cash. The clerk turned him down because he said he couldn't open the cash register without a food order. When the man ordered onion rings, the clerk said they weren't available for breakfast. The man, frustrated, walked away.

(Is this like the bank robbery that was thwarted by the clerk who told the robber he'd written his "this is a hold up" note on the back of another bank's withdrawal slip so she couldn't accept it?)

When a man attempted to siphon gasoline from a motor home parked on a Seattle street, he got much more than he bargained for. Police arrived at the scene to find a very sick man curled up next to a motor home near spilled sewage. A police spokesman said that the man admitted to trying to steal gasoline, but he plugged his siphon hose into the motor home's sewage tank by mistake. The owner of the vehicle declined to press charges saying that it was the best laugh he'd ever had.

Maybe these crooks need a hobby. 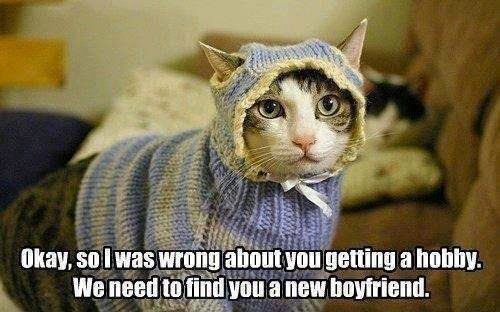 This one could have been a funny but it made me say "aw". 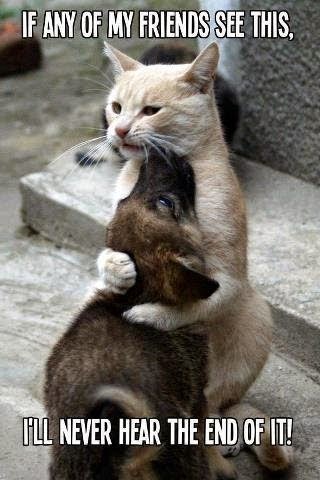 Thanks for putting up with the Nana brag.  I'll try to keep them under control.

I hope you're over the mid week hump and sailing toward the weekend.
Make it a great one.

How come it takes so little time for a child who is afraid of the dark to become a teenager who wants to stay out all night?

(Oops, I slipped back into Nana mode. Sorry.)

Off to Church on Hump Day...Sort Of

First, I want to thank DL Hammons again for choosing me for a blog blitz last week. It was a blast receiving comments from so many new guests. I received over 200 comments between the two blogs involved so it will take me quite a while to return all your visits but I really appreciated everyone who came by and especially those who became Followers.

On to hump day.

This has got to be the greatest hump day picture ever. 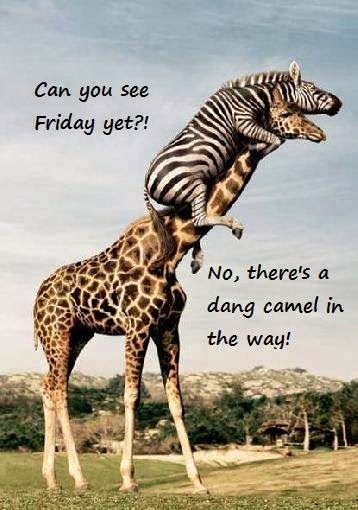 Don't you think so?

We've a lot of fun from time to time with church bulletin bloopers.
How about these minutes from the Deacon's meeting?

The newly elected secretary for the Deacon Board at church submitted this report:

Deacon Meeting Minutes
October the something Deacon's meeting.
Present was most of the deacons; one was absent.
Chairman Tad asked Luke to say something, and he did.
New officers were needed; some of us were arm twisted into taking the positions.
Some old business was remembered, and most of it had been approved. What wasn't was not important.
We tried to think of some new business, but it was decided that we're too old to be new.
Some of the deacons were getting tired so we decided to get out of the meeting.
(Secretary's note: I said I would type the meeting minutes; not that they would be worth a hoot!!)

Yup, that's the kind of minutes I'd take.

Of course, good church goers never judge others. Including this young lady. 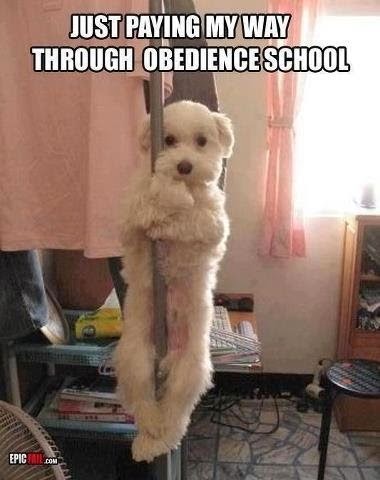 Hmm, I seem to have stumbled onto a theme for this post so let's go with one more "church" item.

A Sunday school teacher was discussing the Ten Commandments with her five and six year olds.
After explaining the commandment to Honor thy Father and thy Mother, she asked, "Is there a commandment that teaches us how to treat our brothers and sisters?"
Without missing a beat, one little boy answered, "Thou shall not kill."

I'll bet he has sisters.

I guess we've got room for one confession. 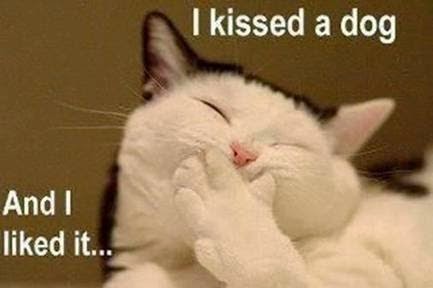 Okay, time your your weekly "aw".

This one may not get an immediate "aw" but take a second to enjoy her contemplation and see if you don't feel that "aw" coming on. 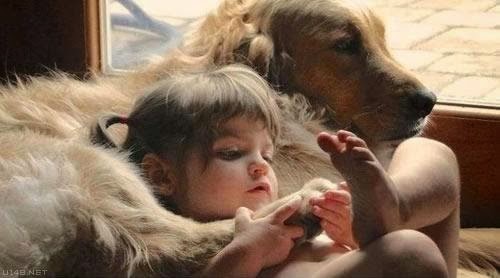 That's it for today. Did we get you there?
Over the midweek hump and on the slippery slope to the weekend?
Excellent. My job is done.
(Did you have a favorite?)

Have a wonderful rest of your week and a fun filled weekend.
See you next Wednesday.

Q: What do you call a group of rabbits hopping backwards?
A: A receding hare line.


I'm scrambling  a bit this morning. I was behind doing today's post due do assorted grandchildren happenings and I discovered this morning that I was the lucky recipient of a BLOG BLITZ, 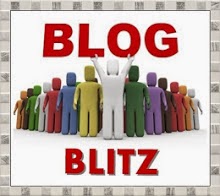 courtesy of blogger DL Hammons. Thank you, DL. You've made my day.

Well, except now I'm bouncing between getting this post done and answering all the lovely blitzers who are leaving comments on last week's post.  A rather nice dilemma, wouldn't you say?

So, let's get on to some hump day funnies.

This one just cracked me up. No excuse. 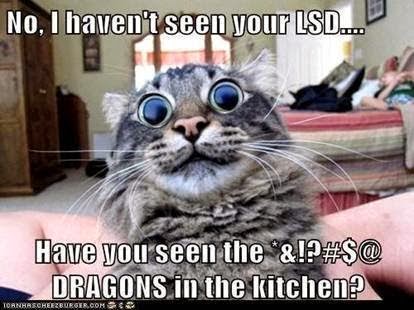 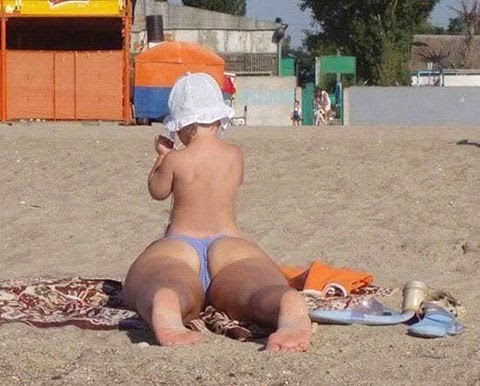 I had to look at this one twice. 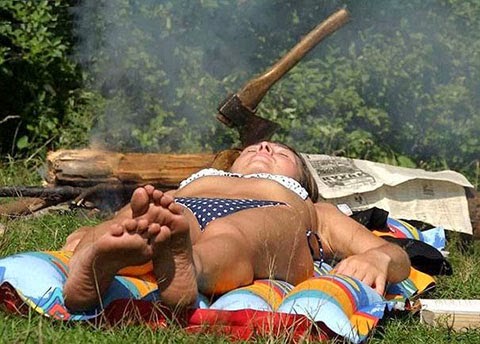 This one needs some blood spatter but I feel a mystery story coming on. 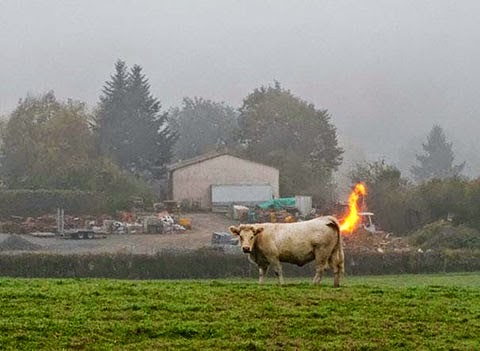 I hope this is just the camera angle, but you hear stories...

You know, it's been a while since I gave you a real groaner. In celebration of my getting blitzed, I offer this one:

Smitty was a heating and cooling technician. His assistant was a small chimpanzee he had trained to do all the duct work. The chimp had no fear of heights or confined spaces, and worked for bananas.

One day, Smitty got a call from a customer who said his air conditioner had broken down. Smitty went over and discovered a problem in an air duct. The customer asked if it would be hard to repair.

"No problem," replied Smitty, "I can fix it in no time with a little duct ape."
I know. I'm sorry.
Or maybe you prefer the one liners...
The guy who fell onto an upholstery machine is now fully recovered.

When you've seen one shopping center you've seen  a mall.
His will was a dead giveaway.
Okay, I'm done. I promise.
Let move on your your weekly "aw".
Do you like this one? 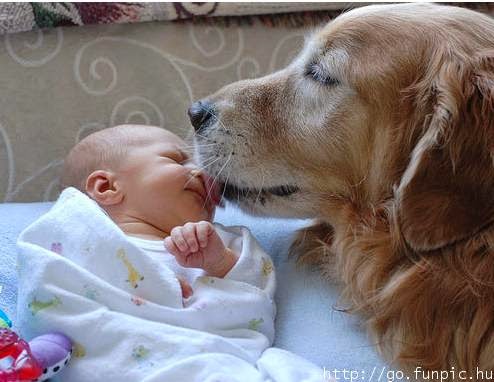 Some moms might not allow this but I say love is love.

That's it. Are we there yet? Over the hump and heading for the weekend?

I hope so.  Did you have a favorite?

For all my Christian friends, I wish you a joyous and blessed Easter.

Quote for Today:
Let us be grateful to people who make us happy; they are the charming gardeners who make our souls blossom.  ~Marcel Proust    (Thanks again, DL.)
Posted by LD Masterson at 1:05 PM 110 comments

I'm back. Did you miss me? Notice I was gone?

I had an interesting and rewarding time serving with our church's disaster recovery team in Union Beach, New Jersey, but I was blown away by the amount of devastation still waiting for recovery efforts a year and a half after superstorm Sandy. So many people are still without their homes or trying to live in partially repaired houses. Like many people, I'd thought the bulk of the damage had been repaired. The national media goes home and we assume the crisis is over. It isn't. Please give the people who were affected by Sandy your prayers and any support you can.

Now on to our hump day funnies.

Since I mentioned the media, how about some headlines?

Think about it a second. 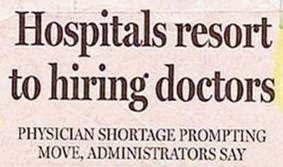 Wow. They must have been desperate. 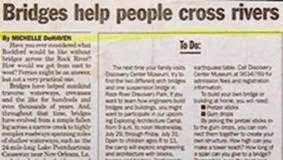 But his head feels fine. 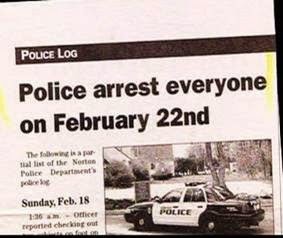 I guess that was a good day to be a nobody.

Here's a joke I heard the other day.

Man on phone to wife: "Honey, don't panic, but I got hit by a car at lunch. Paula brought me to the hospital. They've taken a bunch of X-rays and I've got three broken ribs and a compound fracture in my left leg. I've only got a minute to talk because they're taking me up for a CAT scan to check for bleeding inside my skull but I told them I had to call you."

Wife's response: "Who is Paula?"


This one just seems kinda timely: 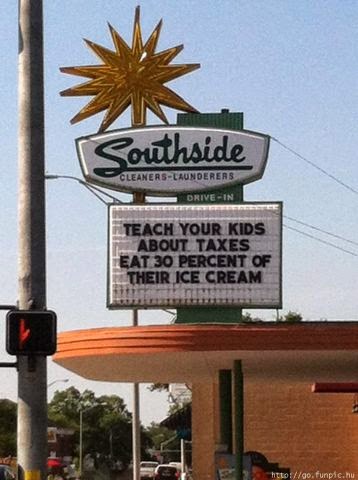 Okay, time for your "aw". I defy anyone to look at this picture and not say it.
Or at least feel it. 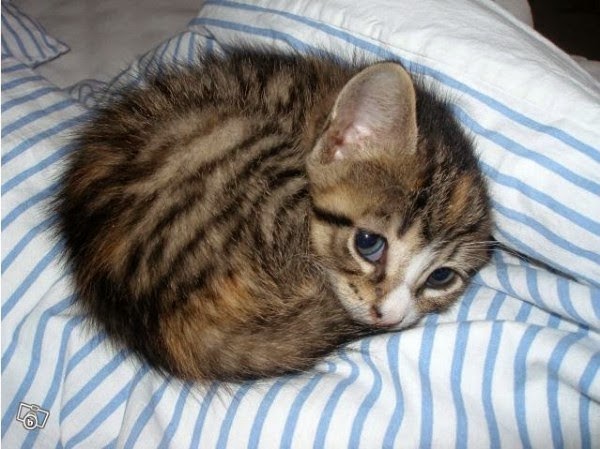 You know you did.

That's it for today. Are we there? Over the hump and on the downhill slide to the weekend? I hope so.

Have a great weekend and I'll see you here next Wednesday (if not at your place before then).

Question of the Day: